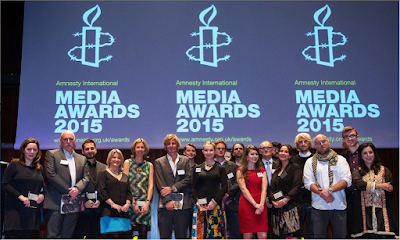 My reporting of the Ebola virus outbreak in Liberia was recognised at the Amnesty International Media Awards last night, where I was handed the Gaby Rado Memorial Award.

The articles published in the Sunday Times, the Observer and the Independent on Sunday sought to highlight the broader impact of the disease on already impoverished communities.

The stories showed how people were dying not just from the virus itself, but from fear and as a result of the government and international community's inadequate response.

Part of my acceptance speech

The Gaby Rado Memorial Award recognises the work of a journalist who has been covering human rights issues for less than five years.

Posted by Gabriella Jozwiak at 09:15