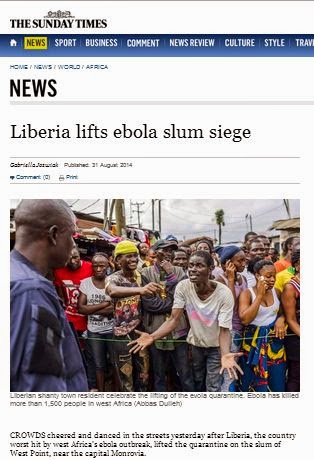 "CROWDS cheered and danced in the streets yesterday after Liberia, the country worst hit by west Africa’s ebola outbreak, lifted the quarantine on the slum of West Point, near the capital Monrovia.

Lewis Brown, the information minister, said the decision did not mean there was no ebola in the shanty town, which houses more than 50,000 people. But he said the authorities were confident that they could identify any new cases and that the community was co-operating with the fight against the disease.

The imposition of quarantine and a night-time curfew 10 days ago led to protests in which three boys were shot by security forces..."

Read the full article on the Sunday Times website.
Posted by Gabriella Jozwiak at 02:36 No comments: 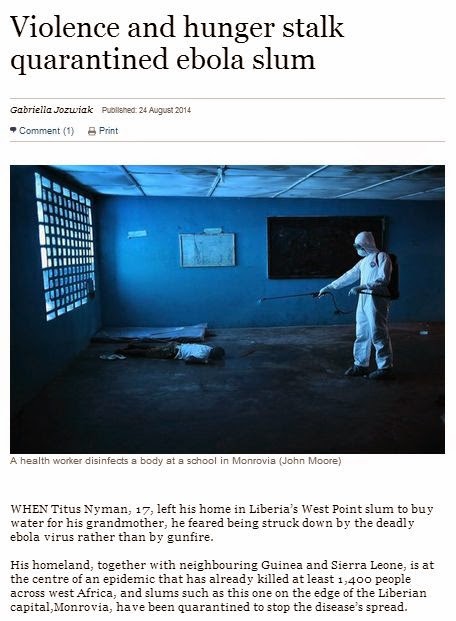 "WHEN Titus Nyman, 17, left his home in Liberia’s West Point slum to buy water for his grandmother, he feared being struck down by the deadly ebola virus rather than by gunfire.

"His homeland, together with neighbouring Guinea and Sierra Leone, is at the centre of an epidemic that has already killed at least 1,400 people across west Africa, and slums such as this one on the edge of the Liberian capital, Monrovia, have been quarantined to stop the disease’s spread.

"On Wednesday, however, an angry mob had gathered to protest against the government’s decision to isolate the community of about 75,000 people. As Titus passed the military blockade, security forces opened fire. He and two other boys were left bleeding on the ground..."

Read the full article on the Sunday Times website.
Posted by Gabriella Jozwiak at 07:40 No comments: 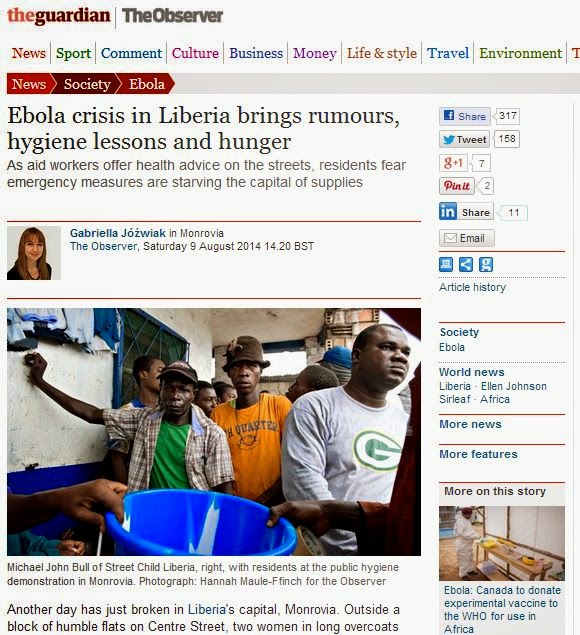 "Another day has just broken in Liberia's capital, Monrovia. Outside a block of humble flats on Centre Street, two women in long overcoats jump out of a taxi, avoiding the torrents of rainwater pouring along the gutter as they carry a large plastic bucket. On the porch, a crowd of young homeless men take shelter. They are about to receive a lesson in handwashing, non-contact and recognising symptoms of the deadly Ebola virus. It has killed 249 of their countrymen so far since March, 961 worldwide, and prompted 1,779 reported cases internationally.

"The fact that Ebola is spread through bodily fluids such as sweat and saliva means that reducing physical contact has become a national obsession..."

Read the article in full on the Observer and Guardian Website.

Click here to donate to Y Care International  or text EBOL35 with your donation amount to 70070
Posted by Gabriella Jozwiak at 09:44 1 comment:


While working in Monrovia, Liberia with youth development charity Y Care International I gave a skype interview to Channel 5 News to explain the Ebola situation on the ground.

Y Care International has launched a fundraising appeal to help spread awareness of Ebola. You can read more about the work its doing to combat the disease here.

Posted by Gabriella Jozwiak at 09:34 No comments:

The Independent - 'Ebola outbreak: Liberia - a country plagued by fear' 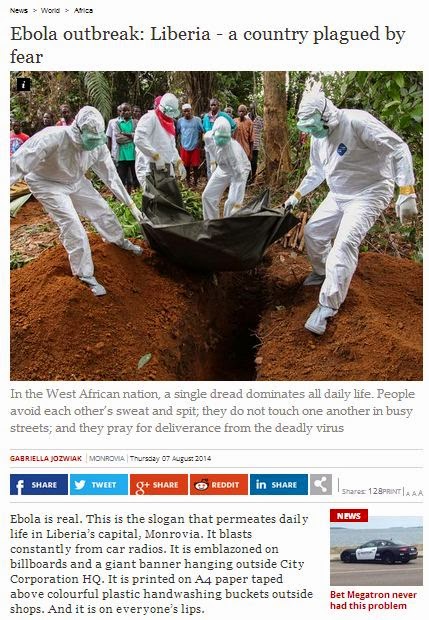 "Ebola is real. This is the slogan that permeates daily life in Liberia’s capital, Monrovia. It blasts constantly from car radios. It is emblazoned on billboards and a giant banner hanging outside City Corporation HQ. It is printed on A4 paper taped above colourful plastic handwashing buckets outside shops. And it is on everyone’s lips.

"The haemorrhagic fever has so far claimed 255 lives and prompted 468 reported cases nationwide...

Read the article in full on the Independent website.
Posted by Gabriella Jozwiak at 09:23 No comments: