Most promising newcomer to education journalism 2013

This year I was shortlisted for a CIPR Education Journalism Award in the most promising newcomer to education journalism category.

This recognised articles I had written for Children & Young People Now magazine on the ratios debate in the early education sector in 2013. In January the government published plans to change legal ratios of childcare providers to children in early years settings. This was met with huge opposition from early education providers, which eventually prompted the government to u-turn on the policy.

The full short-list for the award is available here.

Posted by Gabriella Jozwiak at 13:54 9 comments: 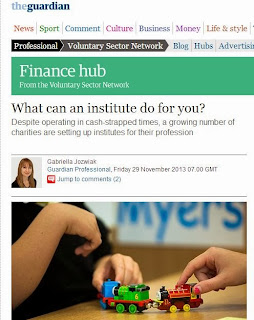 In What can an institute do for you? I explored why so may organisations are currently setting up institutes - especially in a recession.

The piece is full of examples of how this can help organisations achieve their aims, and how to best go about it.

You can read the article in full here.
Posted by Gabriella Jozwiak at 10:17 2 comments: 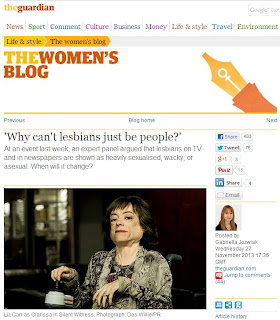 My blog for the Guardian Women's pages presents the arguments voiced by top gay female journalists at an event I organised with Women in Journalism and Diva magazine.

My idea for the debate followed Diva magazine's launch of its Everyday Lesbophobia campaign.

The event prompted three comment pieces in total, and plenty of Twitter activity under the hashtag #WIJlesboph.

You can read my article in full here.
Posted by Gabriella Jozwiak at 10:10 2 comments: 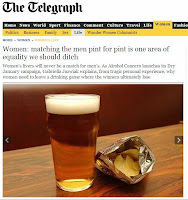 Drinking less alcohol is something that would benefit everyone. But in this piece I argue why women in particular need to assess their behaviour.

Read the article in full on the Telegraph WonderWomen site, and find out more about the Dry January campaign at www.dryjanuary.org.uk.

Posted by Gabriella Jozwiak at 14:14 2 comments:

My recent blog for the London Review of Books Blog argued against the Conservative party's plans to cut benefits for under 25-year-olds, and for Labour's plans to lower the legal voting age to 16.

Read it in full at lrb.co.uk/blog

In the past I have also blogged about issues affecting young people for Left Foot Forward.
Posted by Gabriella Jozwiak at 12:07 No comments:

I write news and features for Nursery World magazine, covering issues affecting education and childcare for under fives.

In September I left my position as senior reporter at Children & Young People Now magazine.

Investigation: Almost half of councils plan to withhold money earmarked for free childcare for disadvantaged two-year-olds from early years providers

Posted by Gabriella Jozwiak at 08:27 No comments:

In this article I considered how improving street lighting might help protect vulnerable, homeless children living in Sierra Leone.

You can read it published as a blog on charity StreetInvest's website: Sierra Leone’s street children’s illuminated future.

Posted by Gabriella Jozwiak at 10:59 No comments:

Today the Times publishes the results of a long-term investigation into a shocking tax evasion scheme run through one of the UK's largest charities. I worked with the Times to break this story and provided the initial leads.

The case raises serious questions about the efficiency of the Charity Commission, HM Revenue & Customs and the UK tax system which allows such practices to happen.

Margaret Hodge, chairwoman of the Public Accounts Committee, told the Times: “Of all the tax avoidance schemes I have come across, this is perhaps the worst. I thought I was past being shocked, but this genuinely has shocked me."

Read the full story here: Charity at heart of massive tax avoidance scam and here: Charity donated £55,000 while its investors claimed £46m in gift aid
Posted by Gabriella Jozwiak at 16:08 No comments: