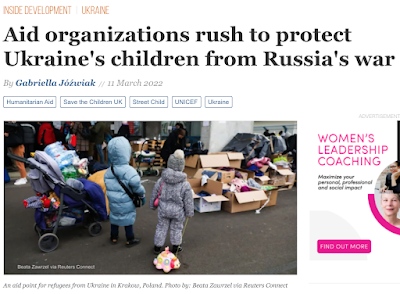 "On Thursday at 11 a.m., two weeks after Russia invaded Ukraine, the country’s commissioner for human rights Liudmyla Denisova posted on Telegram that 71 children had died and more than 100 had been injured.

This included two children and their mother killed by Russian mortar fire as they fled the town of Irpin near Kyiv on Sunday. And a child was killed Wednesday, when a Russian airstrike hit a maternity and children's hospital in the city of Mariupol.

“For Russia's military invasion of Ukraine, the atrocities of Russian militants, and the violation of all Geneva conventions, Ukraine is paying an exorbitant price — the lives of its children, the future of our people,” said Denisova…"

Read the full piece on Devex.com.
Posted by Gabriella Jozwiak at 03:16 No comments:

Equal Times - Why is there a global shortage of midwives and what needs to be done about it? 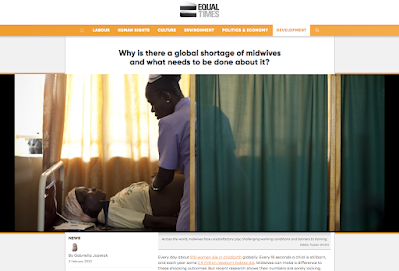 "Every day about 810 women die in childbirth globally. Every 16 seconds a child is stillborn, and each year some 2.4 million newborn babies die. Midwives can make a difference to these shocking outcomes. But recent research shows their numbers are sorely lacking.

"According to The State of the World’s Midwifery 2021 report (SoWMy 2021), the world currently needs 900,000 more midwives. This represents a third of the required global midwifery workforce..."

Posted by Gabriella Jozwiak at 02:23 No comments:

Devex - How clearing up kids’ poop could save lives 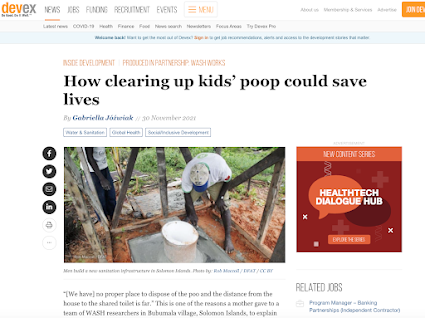 “[We have] no proper place to dispose of the poo and the distance from the house to the shared toilet is far.” This is one of the reasons a mother gave to a team of WASH researchers in Bubumala village, Solomon Islands, to explain why she does not dispose of her children’s feces in a “safe” way.

The World Bank’s Water and Sanitation Program considers safe disposal for a child’s stools to be in a toilet or latrine. But in the Solomon Islands, parents might leave their child’s poop on the ground where it landed, throw it in the sea, a mangrove, or perhaps in the trash. Later, a child might play in that contaminated area and become seriously sick.

Around the world, child feces management, or CFM, is a complex, neglected issue causing childhood illness and death. While water, sanitation, and hygiene programs seek to tackle open defecation in communities, they have historically addressed children’s toileting habits inadequately. Communities misunderstand the serious outcomes of CFM and societal factors, including gender roles in childcare, affect the problem...

Read the full story on Devex.com.
Posted by Gabriella Jozwiak at 03:00 No comments: 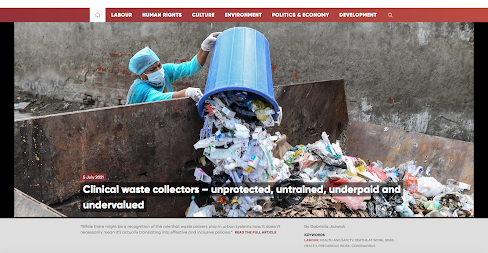 "It was an accident that could have been avoided. While a waste collector was incinerating infectious waste at Connaught Hospital, Sierra Leone’s principal adult referral centre in the capital Freetown, a spark shot out of the intense furnace into his eye and destroyed it..."
In low and middle income countries, managing clinical waste is a dangerous job. Read the full story on Equal Times.

Devex - The looming waste crisis that will follow COVID-19 vaccinations 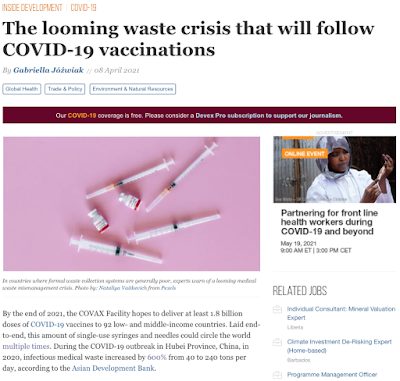 By the end of 2021, the COVAX Facility hopes to deliver at least 1.8 billion doses of COVID-19 vaccines to 92 low- and middle-income countries. Laid end-to-end, this amount of single-use syringes and needles could circle the world multiple times. During the COVID-19 outbreak in Hubei Province, China, in 2020, infectious medical waste increased by 600% from 40 to 240 tons per day, according to the Asian Development Bank.

As countries race to vaccinate their populations, the amount of hazardous, clinical waste they produce will rise. In places where formal waste collection systems are generally poor, experts warn of a looming crisis...

Read the full story on Devex.com.

Posted by Gabriella Jozwiak at 05:33 2 comments: 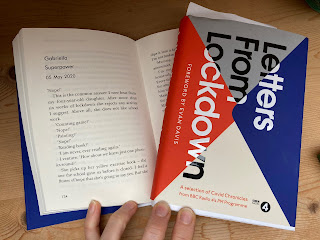 A Covid chronicle is a 400 word long account of personal experiences during the first national lockdown in England from March 2020, played on BBC Radio 4's PM show. My piece about home schooling three under 5s was included in this book, which brought together a collection of chronicles. I was so honoured to be among such moving, inspiring and honest windows into people's lives.

Posted by Gabriella Jozwiak at 02:58 No comments:

Investigation: Inside a London recycling centre – what really happens to rubbish

"The chaos of Britain’s recycling system is exposed today with hundreds of thousands of tons of waste being redirected to landfill or incinerators.

"Despite residents sorting their household waste into separate bins, up to half of “recyclable” material is not being recycled in some areas of England, government data shows.

"It comes as an undercover investigation by The Telegraph and Unearthed reveals staff at a recycling centre in London are sending recyclable plastic and paper to be incinerated..."

I was part of the investigation team that exposed poor recycling practices and working conditions at a London waste processing plant.

Read the full stories on the Daily Telegraph here and here, and on Unearthed.

Posted by Gabriella Jozwiak at 03:46 2 comments: 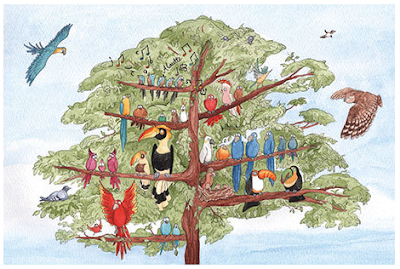 This nine-part series explores how educators of under-fives can ensure their practice is non-discriminatory towards children, their families, and staff.

Read the series as it's published at Nursery World.
Posted by Gabriella Jozwiak at 08:49 2 comments:

Could a global register of aid workers prevent sexual abuse?

Since revelations about Oxfam in February sparked a slew of allegations of sexual exploitation and abuse in the aid sector, agencies have been scrambling to design new policies to ensure such incidents are consigned to the past.

Creating a global register of aid workers is among several proposals made by the United Kingdom government and development organizations to improve standards and restore trust. Two groups are currently working to scope out how such a register might work in practice: One organized by international development network Bond, which is set to report at the Department for International Development’s International Safeguarding Summit on Oct. 18; the other convened by Save the Children, with experts from NGOs including Christian Aid, Oxfam, CARE International, and CAFOD, which is feeding into the Bond group... 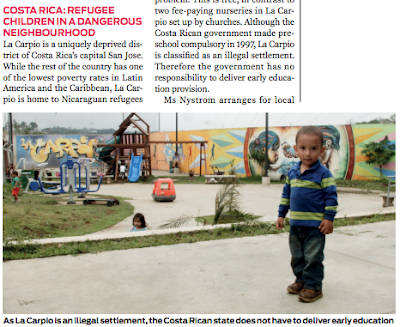 Globally almost half of all three- to six-year-old children (159 million) are deprived of access to pre-primary education, according to the World Bank. This is despite worldwide recognition that a child’s first years provide a window of opportunity to prevent future inequality.

Investing in this area improves children’s cognitive, linguistic, social and emotional skills, and makes them more likely to learn better at primary school and to earn higher wages later as adults.

This article looked at four examples, in Peru, Uganda, India and Costa Rica.


Read the full story on Nursery World.
Link to pdf of full article.
Posted by Gabriella Jozwiak at 08:30 2 comments: 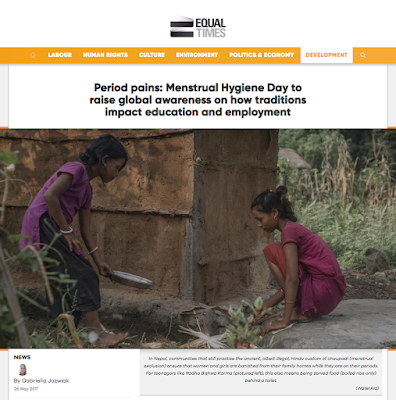 When 15-year-old Roshani Tiruwa lay down to sleep close to an open fire in a small mud hut last December, she was unaware that the smoke from the fire would suffocate her. Why was such a young girl sleeping alone just metres from her family home? Because Roshani was on her period.

Her death on 16 December was the second within a month in Nepal’s western Achram district caused by women being banished from their family homes because of cultural beliefs surrounding menstruation. Dambara Upadhyay, 21, was found dead in a hut on 19 November under similar circumstances, according to various news reports.

The ancient Hindu practice of chaupadi considers menstruating women to be impure. Those who uphold the practice forbid women and girls from touching men or even entering their own homes, and prohibit them from eating certain foods. Disastrous consequences are believed to follow transgression, such as crop failure…

Read the full story on Equal Times.
Posted by Gabriella Jozwiak at 03:36 7 comments: 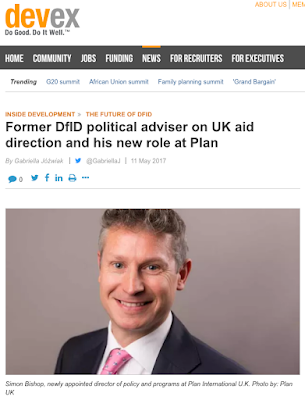 Before our interview, Simon Bishop — recently appointed director of policy and programs at Plan International U.K. — insists that the topic of his previous employer is off-limits.

As a special political adviser to the United Kingdom’s former Secretary of State for International Development Justine Greening, Bishop spent two and a half years providing political, policy and media advice that shaped the direction of the government’s development strategy.

Although some of the controversial policies announced by the Department for International Development since Greening and Bishop left in July last year may have been gestating while he was in the post, Bishop refuses to comment on them. “Mischievous journalists can turn that into nice headlines,” he told Devex. “I've got to be careful”…